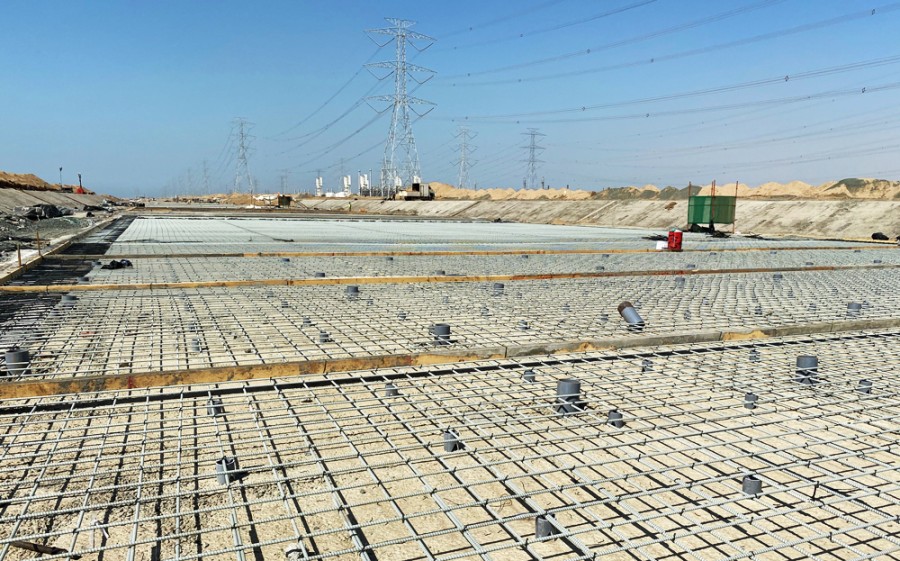 Work on the 23km long Flood Mitigation Channel in the new Jizan Economic City (JEC) in Saudi Arabia is well underway. When completed, it will be the world’s largest project to be constructed using glass fiber reinforced polymer (GFRP) composite rebar as its concrete reinforcement. Mateenbar is contracted by Saudi Aramco as the majority supplier of GFRP rebar for the Jizan project.

Jizan Economic City will be an industrial hub and home to a Saudi Aramco oil refinery, with a busy port on the Red Sea. In an area with little rainfall and poor drainage, this region is prone to flooding. When it does rain, a small amount can lead to major surface flooding, causing property damage and risk to life. The flood channel plays the vital role of protecting the surrounding areas from major flood damage.

The channel will be exposed to a combination of common oil field fluid, chemicals, high salinity water and bacteria – all highly corrosive to steel. Mateenbar™ is corrosion-free and its highly chemical resistant properties will increase the channel lifespan and significantly reduce whole-of-life cost.

The Jizan Tunnel project is seen as a significant turning point in the infrastructure sector. With a long and costly history of corrosion worldwide, steel is no longer viewed as a cost-effective option in aggressive environments. The JEC Flood Channel is one of many landmark projects embracing GFRP rebar for its concrete reinforcement worldwide.

Mateenbar’s CEO, Nick Crofts, sees Jizan as a watershed moment in concrete reinforcement. Saudi Aramco applied its already proven non-metallic initiative to the problem of asset life. The ASTM standards and ACI codes were already in place: Saudi Aramco simply mandated the use of GFRP rebar to accelerate change. Changing to GFRP rebar did not increase the cost of the flood channel. “That surprised a lot of people”, remarked Mr Crofts.

This project is being watched with interest by leaders in construction as governments and private firms alike are looking to GFRP rebar as the solution to increase asset life span, reduce costly repairs, and build lasting structures for the next generation.